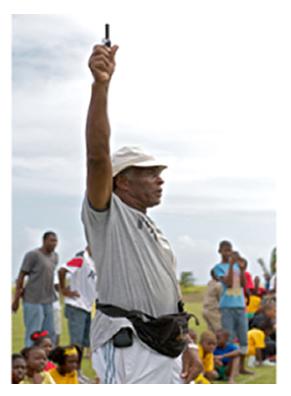 Rochester, NY - James “Jim” Wedderburn was the first Barbadian to win an Olympic medal when he teamed up with Jamaicans Mal Spence, Keith Gardiner, and George Kerr to win a bronze medal in the 4x400 yards relay at the 1960 Rome Games. Over 55 years later, a still fit-looking Wedderburn, who celebrates his 79th birthday this year, looks back at this Olympic medal-winning performance. Jim “Lolly” Wedderburn has undoubtedly been a trail blazer in athletics in Barbados, achieving a number of firsts.

A stand-out middle-distance runner at The Lodge School, especially in the 440 yards, Wedderburn was the first Barbadian to receive an athletic scholarship to a university in the United States, way back in 1958. A product of Bayfield, St Philip, Wedderburn studied at New York University, successfully completing a degree program in physical education. Following graduation Jim relocated to Rochester, New York and became a physical education teacher at the historic James Madison High School. Later on he went on to serve as vice principal of the Wilson Magnet High School and later principal of the Edison Technical and Vocational High School. Having served as a teacher, dean of students, department head, a vice principal and principal, Jim returned home to Barbados to become the first Government athletics coach.

Wedderburn, who has a stand at the National Stadium named after him, was awarded a Companion of the British Empire (CBE) by Government in 2000. 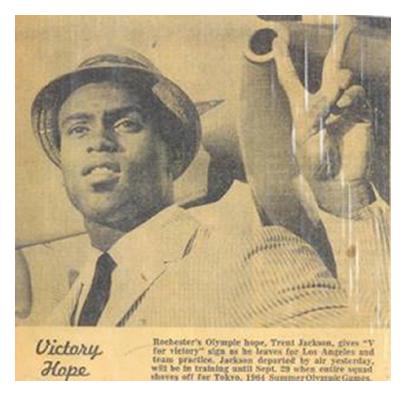 Rochester, NY – Rochester’s’ own Trent Jackson better known as “TJ” became a permanent fixture at Baden Street Settlement House. Trent attended Benjamin Franklin High School, where he set the National High School Record in the 100-yard dash (9.4). After being taught, coached, and mentored by Coach Mauro Panaggio, TJ pursued his dream at the University of Illinois. He became a Collegiate All-American, as well as Big Ten, Rose Bowl, and National Champion, lettering on the track, football, basketball, and baseball teams. In 1964, he won the Big Ten 100-yard Dash in 9.5, the 220-yard dash in 21.3, and anchored the championship 440-yard relay, the NCAA 4x110 yard relay championship, set the National Collegiate Record in the 100-meter dash (10.1), won the AAU 100-meter championship, the US Olympic Trials 100-meter dash, represented the United States at the Olympic Games in Tokyo, Japan. After he became a member of Omega Psi Phi Fraternity, Inc. in 1965, he finished 3rd at the NCAA 60-yard dash. Then, he led Illinois to the 4x440 yard relay championship at the outdoor Big 10 championship. TJ held the 100-meter record at Illinois for 40 years.

In 1966, Trent was drafted by the St. Louis Cardinals baseball team. However, he chose to play football in the National Football League. After playing for the Washington Redskins and Philadelphia Eagles, TJ returned home, and began his passionate journey, of touching the lives of others through coaching at his alma mater, Benjamin Franklin High School. TJ has the distinction of being inducted into the Rochester High School “Section V” Track and Field, Football, and Basketball Hall of Fame as a player and coach.